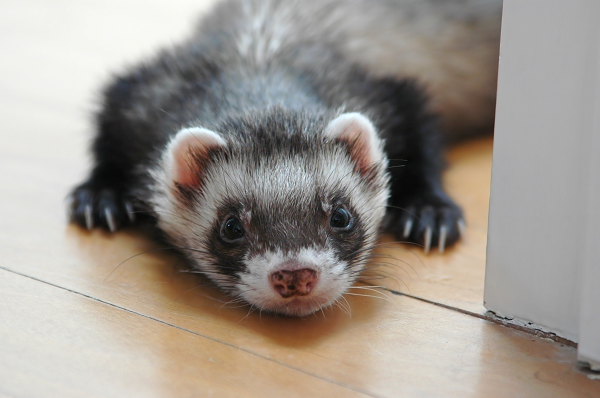 The remaining two major hormonal diseases affecting ferrets are adrenal gland disease and diabetes mellitus. The former is common in ferrets in North America, while the latter is a rare, but important problem.

What is adrenal gland disease?

This disease is associated with hyperactivity of the adrenal gland. It is common in ferrets in North America that are over three years of age. In dogs and cats, this is condition is called hyperadrenocorticism or Cushing's disease; it usually results from a pituitary gland tumor that produces a hormone causing the adrenal glands to produce excessive amounts of a steroid called cortisol. In ferrets, true Cushing's disease does not occur. Although hyperactive adrenal glands and adrenal gland tumors occur, the diseased glands do not produce excessive cortisol levels. Instead, there is an increased production of sex-related hormones like estradiol, androstenedione, and progesterone.

What are the clinical signs of adrenal gland disease in ferrets?

When ferrets have adrenal gland disease, the most common initial sign is hair loss on the top of the pelvis and/or flanks, with or without pruritus (itchiness). Affected female ferrets develop an enlarged vulva, while males often have problems with urination due to prostate enlargement.

How is adrenal gland disease diagnosed?

Hair loss and a swollen vulva are also common signs of persistent estrus, which is common in intact female ferrets and can sometimes confuse the diagnosis. In some affected ferrets, an experienced veterinarian can palpate or feel the enlarged adrenal glands just in front of the kidneys. Abdominal ultrasound may be helpful in some cases, as the spleen is oftentimes enlarged in ferrets with adrenal gland disease.

"In some affected ferrets, an experienced veterinarian can palpate or feel the enlarged adrenal glands just in front of the kidneys."

In many cases, clinical signs and a thorough medical history can lead to a presumptive diagnosis of adrenal gland disease. Special sex hormone blood panels and response to medical therapy or surgery may confirm a definitive diagnosis.

How is adrenal gland disease treated?

Adrenal gland disease may be managed surgically or medically depending on many factors such as which gland is affected (right or left - rarely both), the size of the adrenal gland, the availability of an experienced surgeon, the age of the ferret, the severity of clinical signs, the overall health of the ferret, the presence of other diseases and, in some cases, financial considerations. Most cases are due to either an increase in the size of the adrenal tissue or a benign adrenal tumor (adrenocortical adenoma). Injectable hormone therapy or the use of an injectable hormone implant will resolve symptoms in a majority of ferrets with adrenal gland disease.

Although unwise, some owners may choose not to treat the disease at all, especially if the ferret is senior or the clinical signs are mild. Before making a decision regarding treatment, the pros and cons of the different treatment options should be discussed with a veterinarian experienced with ferrets.

What is diabetes mellitus?

Diabetes mellitus, caused by inadequate production of insulin, is an extremely rare problem in ferrets. It may occur secondary to the removal of a pancreatic tumor, known as an insulinoma, especially where numerous tumor nodules are found in the pancreas.

A presumptive diagnosis of diabetes mellitus can be made based on persistently elevated glucose levels in the blood and urine, but a definitive diagnosis requires measurement of low blood insulin levels in the face of high blood glucose levels. A ferret with diabetes mellitus can be treated with daily insulin injections. As with monitoring diabetes in other species, the ferret's urine should be monitored daily for the presence of glucose.

What about thyroid-related hormonal diseases?

Interestingly, given the prevalence of estrogen-related and insulin-related endocrine disorders, to date, there are no reports of thyroid-related hormonal disease in ferrets.

© Copyright 2022 LifeLearn Inc. Used and/or modified with permission under license.