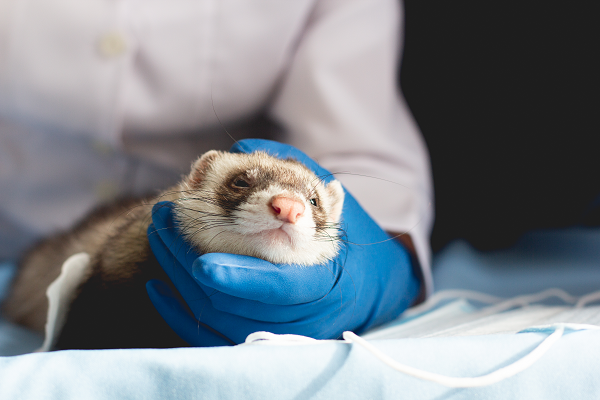 What is an insulinoma?

Insulin regulates blood sugar levels by reducing the amount of glucose in the blood. Cancerous beta cells in the pancreas create insulin at an accelerated rate, regardless of the body’s needs. Glucose is an important energy source for the body. The excess insulin that is produced by an Insulinoma results in dangerously low levels of glucose in the blood, which is called hypoglycemia.

What are the clinical signs of insulinomas?

"Symptoms may progress to seizures and hypoglycemic coma."

Some ferrets with tumors of the pancreas show no obvious clinical signs or may show only intermittent signs. A common early symptom is a difficulty waking a ferret from sleep. Some ferrets display what is referred to as ‘speed bumping’, in which the ferret plays for a moment, then lays flat out for several minutes, then gets up again. If a ferret has intermittent episodes of hypoglycemia, the disease may go undetected for a prolonged time because the signs are not observed by the pet owner. The severity of clinical signs depends on how low the blood glucose gets and will often improve just after the ferret eats.

Insulinomas generally affect ferrets over three years of age but have been documented to occur as early as two years of age.

How are insulinomas diagnosed?

A consultation with a veterinarian familiar with ferrets is necessary. During the consultation, you will be asked to report your observations of your ferret and his behavior in his home environment. Your veterinarian will conduct a physical examination and collect blood samples for diagnostic testing. A blood chemistry profile will assess the blood glucose level and other metabolic parameters.

A measurement of the blood insulin level would seem to be the obvious test but, all too often, ferrets with insulinomas have normal insulin levels at the time of sampling due to the episodic nature of this condition. Blood analysis of insulin to glucose is a more useful test. If there is a high level of insulin in the face of a low glucose level, then the diagnosis of Insulinoma is definitively made.

Because these tumors are extremely small, they are almost impossible to diagnose by abdominal palpation and, most of the time, cannot even be identified by ultrasound examination of the abdomen.

How are insulinomas treated?

Treatment of insulinomas may be medical or surgical, depending on the severity of the disease and the age of the ferret.

Medical therapy involves the use of prednisone (Deltasone®, Meticorten®), a corticosteroid, to help increase blood glucose levels, and diazoxide (Proglycem®) to diminish the release of insulin from the pancreas. These medicines do not stop the progression of the tumors but will minimize the clinical signs. Medical therapy will be lifelong.

Surgery involves removing any visible pancreatic tumor nodules. It is important to recognize that, while it is easy to remove visible nodules, this disease often produces a microscopic spread of multiple tumor cells and surgery is rarely curative. Even with surgery, medical therapy will be necessary. Blood glucose levels should be checked every three to six months by your veterinarian.

Diet must also be managed. Ferrets tend to be grazers or nibblers when they eat so it is preferable to provide four to six small meals per day to help level out blood glucose levels. Daily treats like honey and syrups should be avoided. Although these treats do provide sugar to your ferret, they potentially challenge the cancer cells to make more insulin.

"If your ferret suddenly collapses or experiences a hypoglycemic coma, emergency treatment is critical for survival."

If your ferret suddenly collapses or experiences a hypoglycemic coma, emergency treatment is critical for survival. Immediately rub honey or corn syrup onto his gums (be careful if the ferret is having a seizure, as there is a danger of being bitten). DO NOT DELAY! Rush your ferret to your veterinarian for further supportive care and diagnostics.

What is the prognosis?

Surgical removal of the cancerous nodules and medical therapy are the optimal treatment options; the largest reported series of cases to date have demonstrated a mean survival time after surgery of around 500 days (1.4 years), which is relatively long given that affected ferrets are usually middle-aged at the time of diagnosis. Many ferrets respond well to medical therapy and dietary management. Depending on the severity of the disease, ferrets who are managed medically can live for several months up to several years.

© Copyright 2022 LifeLearn Inc. Used and/or modified with permission under license.